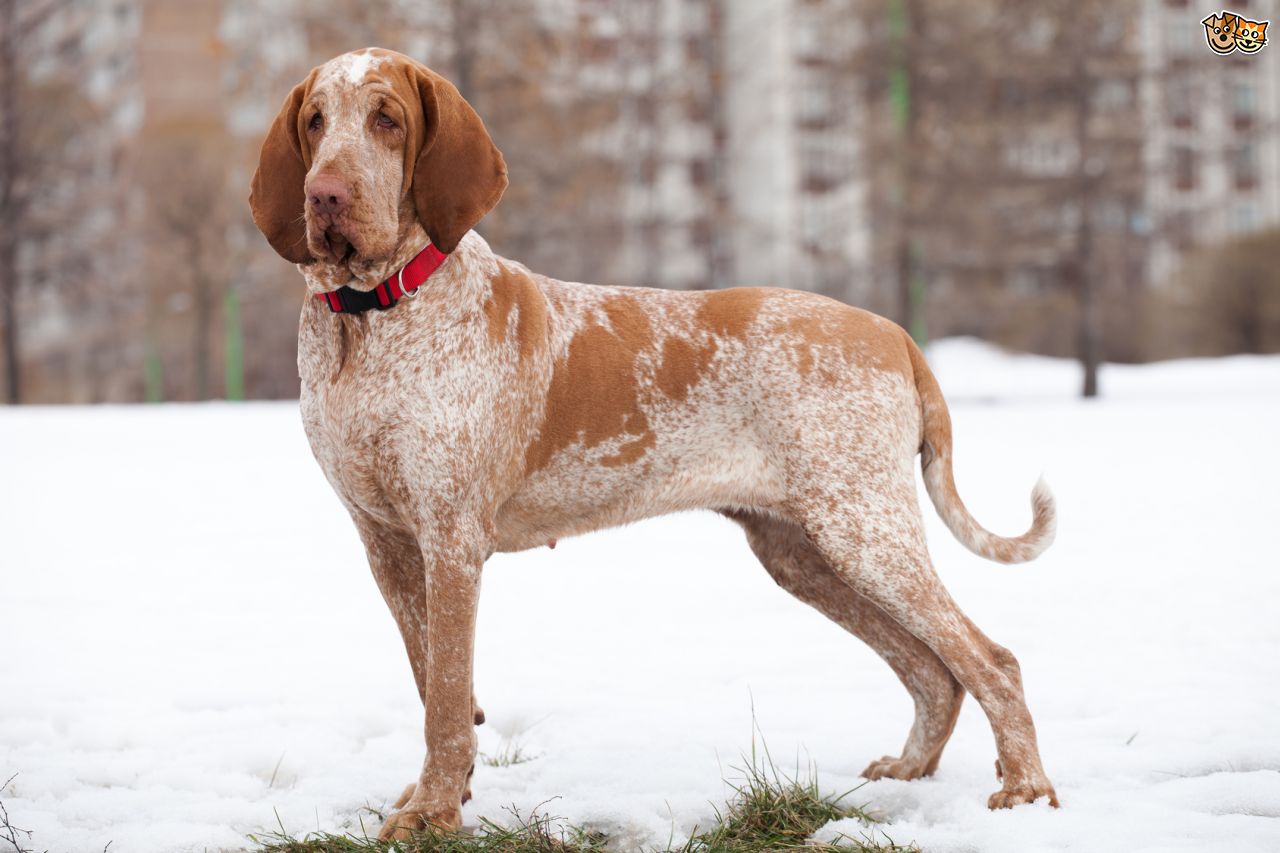 Official Standard of the Bracco Italiano Society of America

This purpose of this standard is to define those qualities of the Bracco Italiano that make the Bracco a premier versatile hunting dog. Evaluation of breeding dogs in the show ring is to always consider the job this ancient breed is bred to do.

General Appearance: Of strong and harmonious construction, power appearance. The preferred subjects are those with lean limbs, well-developed muscles, well-defined lines with a markedly sculpted head and a very obvious lower orbital chiseling, elements which all contribute to give distinction to this breed.

Important Proportions: Length of the body is the same or a little more than the height at the withers.

The Bracco is to be stacked ‘square’ with hocks perpendicular to the ground.

Length of head is equal to four-tenths of the height at the withers, its width, measured at the level of the zygomatic arches, is less than half its length. Skull and muzzle are of equal length.

Behavior and Temperament: Bracco tend to be an aloof breed. They should not show any extreme shyness or any aggression.

Head: Angular and narrow at the level of the zygomatic arches, its length corresponds to four-tenths of the height at the withers; the middle of its length is at the level of a line with unites the inner angles of both eyes; the upper longitudinal axes of the skull and muzzle are divergent, i.e.: if extended, the top line of the muzzle emerges in front of the occipital protuberance, ideally at mid-length of the skull.

Skull Region: Seen in profile, the skull shape is a very open arch. Seen from the top, it forms lengthwise an elongated ellipse. The width of the skull, measured at the level of the zygomatic arches should not exceed half the length of the head. Cheeks are lean, the bulge of the forehead and the supra-orbital ridges are perceptible, whereas the stop is not pronounced. The front groove is visible and ends at mid-length of the skull. The inter-parietal crest is short and not very prominent. The occipital protuberance is pronounced.

Facial Region:
Nose: Voluminous, with large well-opened nostrils, protrudes slightly over the lips with which it forms an angle. Color brown or from pale pink to more or less deep fleshy red depending on the color of the coat.
Muzzle: Foreface either straight or slightly arched. Its length is equal to half of the length of the head and its depth measures four-fifths of its length. Seen from the front, the lateral sides of the muzzle converge slightly, still presenting a foreface of good width. The chin not very apparent.

Lips: Upper lips well developed, thin and floppy without being flaccid, covering the jaw; seen in profile, they overlap the lower jaw slightly, seen from the front, they form an inverted “V” below the nose; the corner of the lips must be marked without being droopy.

Teeth: Dental arches well adapted, with the teeth square to the jaw. The Bracco Italiano has a Scissor bite.Any deviation from a scissors or level bite is to be faulted to the extent of  removing the dog from consideration of placement.

Eyes: Semi-lateral position with a soft and submissive expression neither deep set nor prominent. Eyes fairly large, eyelids oval-shaped and close-fitting  (no entropion or ectropion). The iris is of a more or less dark ochre or brown color depending on the color of the coat. Multi colored eyes are a DQ.(wall eyes)

Ears: Well developed, in length they should, without being stretched, reach the tip of the nose. Their width is at least equal to half their length; raised only very slightly; base rather narrow, set rather backwards at level of zygomatic arches; a supple ear with a front rim well-turned inwards and really close to the cheek is appreciated; the lower extremity of the ear ends in a slightly rounded tip

Neck: Powerful, in truncated cone shape, length not less than two-thirds of the length of the head, well detached from the nape. The throat shows a soft double dewlap.

BODY:
Top-line: The upper profile of the back is made up of two lines: one, almost straight, slopes from the withers to the 11th dorsal vertebrae; the other is slightly arched, joining with the line of the rump.
Withers: Well defined, with the points of the shoulder blades well separated. Loin: Wide lumbar region, muscled, short and slightly convex.
Rump: Long (about one-third of the height at the withers), broad and well-muscled; the pelvic angulation (angle formed by the pelvic girdle with a horizontal line) is 30*. Pelvis wide.
Chest: Broad, deep and well down to level of elbows, without forming a keel, with well sprung ribs, particularly in their lower part, and sloping.
Underline: Lower profile almost horizontal in its rib cage part, rising slightly in its abdominal part.
Tail: Tail may be docked or undocked. Both to be judged equally. When docked it should be aprox. 6 to 10  inches. Undocked: Carried horizontally. May be slightly curved but never held high or carried bent over the back.

LIMBS:
Forequarters: Shoulder strong, well-muscled, long and sloping, very free in its movement; the upper arm sloping, fitting to the rib cage; forearm strong, straight, with strong and well-marked sinews; the point of the elbows should be on a perpendicular line from the rear point of the shoulder blade to the ground; metacarpus (pasterns) well proportioned, lean, of good length and slightly sloping; feet strong, slightly oval shaped, well arched and closed toes with strong nails well curved towards the ground. Color of nails is white, yellow or brown, of a more or less dark shade depending on the color of the coat: pads elastic and lean

Dewclaws: Dewclaws may or may not be removed. To be judged equally. Some Bracco may have double dewclaws and this should not be faulted.

Gait/Movement: Bracco should be gaited at a moderate to moderately quick trot .It is a trotting breed.  When hunting it displays an extended and fast trot, with powerful impulsion from the hindquarters; head raised, nose held high in such a way that, when hunting, the nose is higher than the top-line.

Skin: Tough but elastic; fine on the head, the throat, inside the elbows and on lower part of the body. The visible mucous membranes must be a corresponding color with the coat, but never show black spots. The mucous membranes of the mouth are pink; in the roans or white and chestnut colored dogs they sometimes show brown or light chestnut spotting.

Type of Hair: Short, dense and glossy, fine and shorter on the head, the ears, front part of the legs and feet.

MARKINGS
Roan
A symmetrical facial mask is preferred but the absence of a mask is tolerated
Size and Weight: Height at the withers between 21.5 -26.5 inches Preferred size for males: 23-26.5 inches; preferred size for females: 21-24.5 inches. Weight  between 55 – 88 pounds depending on height.One inch above or below limits indicated in the standard is a major fault.

Faults: Any deviation from the standard that would impair the dog in its job a versatile sporting dog.

Major Faults
Any deviation from a scissors bite.
More than 1 inch below or above standard height at withers.

NB: Males should have two apparently normal testicles fully descended into the scrotum