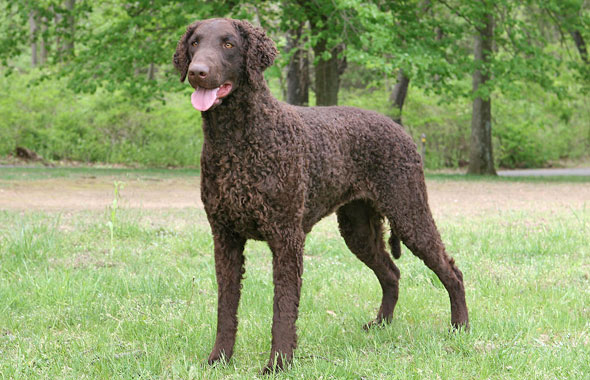 For more information on this breed contact the Curly-Coated Retriever Club of America at www.ccrca.org.

Though the correct origin of the Curly-Coated Retriever is unclear, there appears little doubt that he is one of the oldest of all breeds now classified as Retrievers. He is popularly believed to be descended from the 16th century English Water Spaniel, the St. John’s Newfoundland, the retrieving setter, and, in the late 19th century, the Poodle. The popular gun dog following the Old English Water Spaniel, the Curly was first exhibited in the mid-19th century at England’s Birmingham show. In 1889, specimens were exported to New Zealand, where they have long been used for retrieving duck and California quail. They are also very popular in Australia, where they are used in the swamps and lagoons of the Murray River on duck.

The Curly is admired as a steady and tender-mouthed retriever, quite unsurpassed in the water. The first breed club was established in England in 1896, and the breed was introduced to the US in 1907. The first AKC registered Curly-Coat appeared in 1924. Learn more about the Curly Coat Retriever.