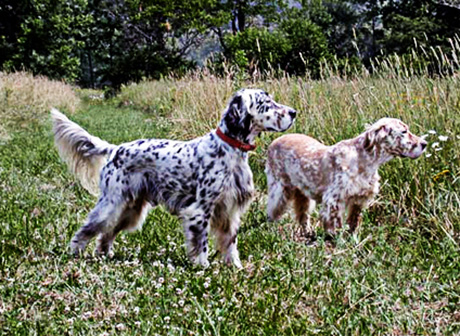 For more information on this breed contact the English Setter Association of America, Inc. at www.esaa.com

Or contact the English Setter Club of Phoenix at their website:
The following information comes the the American Kennel Club.

A graceful, elegant gundog, the English Setter today excels in the show, obedience and agility rings as well as in the field.

Although similar in function to the Irish and Gordon Setters, the English is a distinct breed, differing personality and appearance. Their beautiful feathered coat is white with an intermingling of darker hairs resulting in markings called “belton.” Belton markings can be orange, blue (white with black markings), tricolor (blue belton with tan points), lemon and liver.

A Look Back
One of the oldest gundog breeds, the English Setter was developed in England more than 400 years ago. Believed to have developed from Spaniel stock, the breed was originally called a Setting Spaniel. Before the use of firearms, this “Setting Spaniel” would find the birds and then crouch down on its front legs or “set” to allow the hunter to throw a net over the game. When guns became widely used, a more upright pointing stance was bred into the Setter so he could be more easily seen.

If you are considering purchasing an English Setter puppy, learn more here.